New data from the International Stroke Conference 2021 confirms that mobile stroke ambulances have an essential role to play in pre-hospital stroke care around the world. 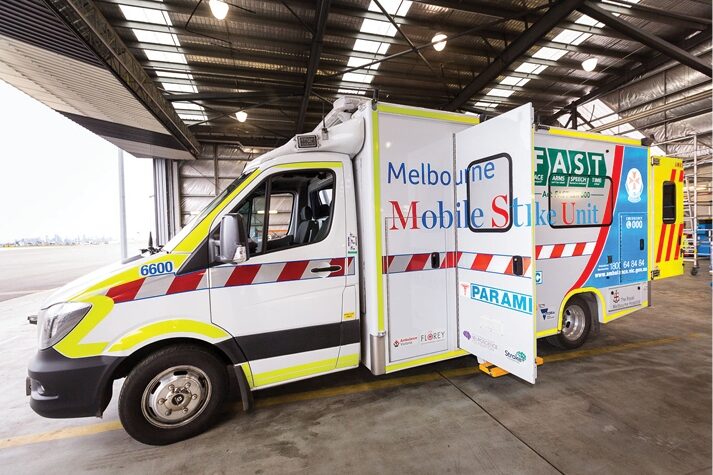 The results indicate that the initial cost of building and the ongoing costs of running a mobile stroke ambulance are covered by dramatically reducing disability from stroke.

Results from the most comprehensive trial of its type, the BEST-MSU study, were delivered by Professor James Grotta from the Memorial Hermann Hospital, Texas Medical Centre.

Professor Stephen Davis AO and Professor Geoffrey Donnan AO, co-chairs of the Australian Stroke Alliance, underline the importance of these findings.  Professor Davis says: “These are very exciting results from a phase 3 clinical trial proving the major clinical benefits of care in mobile stroke units. Ten times as many patients received tPA in the Golden Hour and outcomes were vastly improved.”

Professor Donnan adds: “These results confirm the positive outcomes in the B Proud trial conducted in Europe. Together, these trials provide Level 1 evidence of the benefits of MSU care which should now be widely implemented around the world.

“The average length of stay for a patient will be reduced dramatically so we know the costs, downstream, are going to reduce. This study shows how many patients are disability-free after their stroke, thanks to the early intervention. We see these results on a daily basis so it is very heartening to see it as part of a phase 3 clinical trial.”

The study has been welcomed by Melbourne’s mobile stroke unit team with the results of the BEST-MSU study reflecting data collected by the Australian team which is based at the Royal Melbourne Hospital.

Mobile stroke units are found in several cities around the world including pioneering vehicles in Berlin, Oslo and Houston. There are just two in the Southern Hemisphere, in Melbourne and Buenos Aires. One is being built for Sydney and a second Melbourne vehicle is planned.

The Australian Stroke Alliance is also developing stroke-capable road ambulances for the nation. These would not contain the same specialist equipment or personnel but would house a brain scanner. This would allow urgent diagnosis at the scene of a stroke with paramedics supported by neurologists based at city hospitals, providing advice via new telehealth platform.